I'm not impressed. I've played against Tom McEvoy, and he is really bad, truly a lousy player, but most of the rest of the players around that same table weren't exactly the greatest either.

They have one thing going for them that I haven't: their bankroll. But I can't help thinking there must have been a LOT of lucky circumstances there...
Posted by Amos Keppler at 6:32 PM No comments:

It’s a fairly small amount even compared to what I used to win in a given month, at one brief time in my life.

But it’s a great progression compared to the low point I’ve been at for some time, now.

And it’s also great that I’ve won it in several different types of games: Omaha, Texas Hold’em, Pot Limit, No Limit, Limit, in both tournament and cash games play.


And I find myself facing new problems. I no longer have any problem with going on Tilt, not even slightly. My major problem, these days, after a long winning streak, is that I tend to play uninspired. I can play inspired for hours and even days and nights, and then suddenly, I hit a wall of indifference inside myself.

There are occasions, when players need a break, after having played a lot for weeks. This isn’t exactly like that, but more of a seemingly lasting (god forbid) problem.


And I have a problem, when playing poker, of course: I’m not greedy. So, when I know I no longer need to win to put food and stuff on the table for a while, I tend to play uninspired. And every game I play should count, count as if it was my last one.

In this as well, poker imitates life, is life.
Posted by Amos Keppler at 8:05 PM No comments:

World Series of Poker Main Event 2006 (and its implications)

One thing I noticed more than anything, even beyond the fact that once again a total unknown emerged victorious in the largest field ever, was all the action, the practically constant action around the table.

It has been claimed that you can’t really learn much by watching the pros on television, since you only see a few hands, one hour or so of many hours of play. You see the action, not the many close to no-action hands. I agree with that. But I also think that you can pick up quite a lot by watching even that hour.

I watched the last six hours of the final table on a pirate download of the ESPN direct broadcast. We watched every single hand, every single move on the table. As stated there was a distinct difference between this and previous years’ final tables. The game has obviously changed again. There was not much left of the «rest periods» from yesteryear. The Stu Unger tenet of the need for dominating the table, at least in part, has now become gospel for almost anyone. Anyone not doing it falls behind very fast. The condensed broadcast from the final tables becomes increasingly more accurate these days.

So, yes, provided that the action is at least close to faithfully rendered, we can now learn even more by watching and observing games on television.
Posted by Amos Keppler at 7:35 PM No comments: 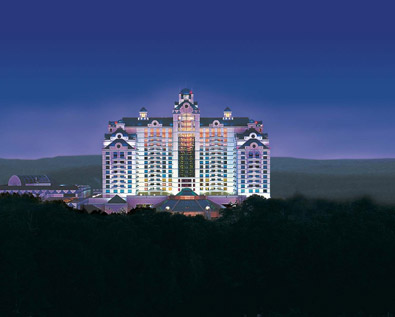 Foxwoods Casino Resort, Connecticut is a dream, a mirage in the forest, one giant fantasy in the wilderness.

My foremost impression of the first so-called Professional Poker Tour is about Chris Biegler. The thing about him is that he hardly even looked like Chris Biegler anymore, poker wise. Everybody seeing him play says the same: he’s quite a different player compared to only a year ago, far sharper and more dangerous. I agree. He used to be insecure, hesitant and fairly easy to roll over. Now he’s the one doing the rolling. I particularly enjoyed his duels with Hoyt Corkins and John Juanda. He broke Corkins, and I think Juanda was lucky to win in the end. While Biegler was the very epitome of calm, Juanda was practically drowning in sweat and anxiety.

Seeing him improve this dramatically means there is hope for us all…
Posted by Amos Keppler at 9:39 PM No comments: